What’s ticking off your dog?

Dee Ward-Thompson investigates a type of tick you might not have come across yet but is slowly becoming more prevalent in the UK. 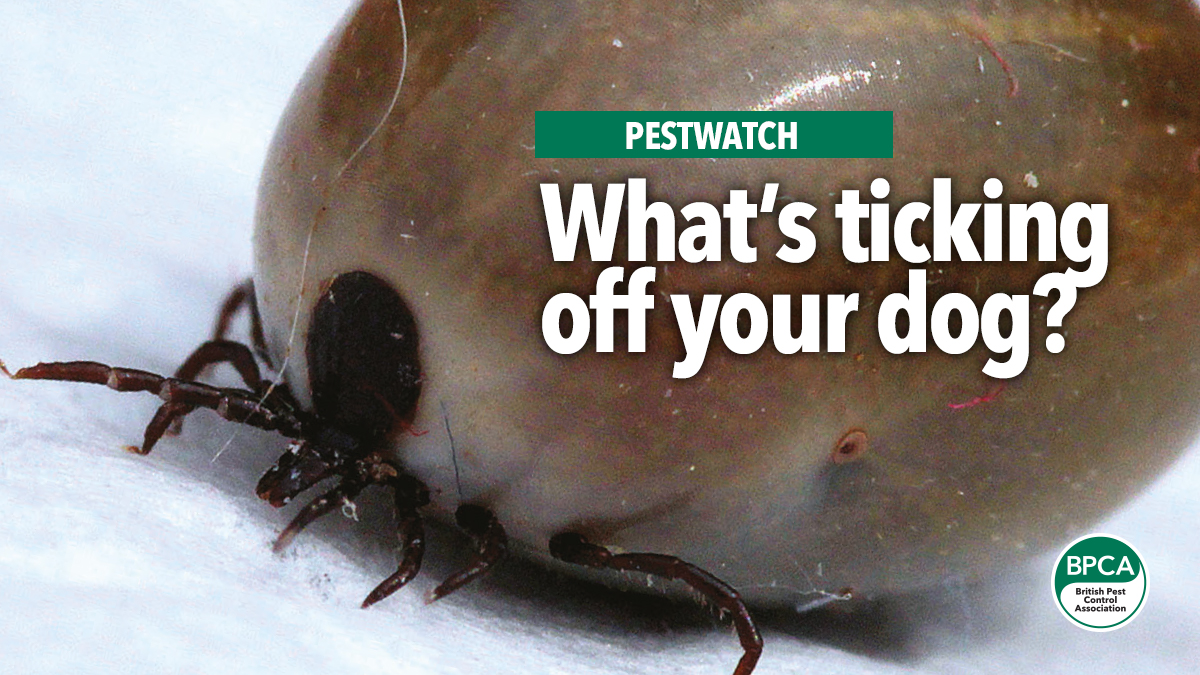 At the end of last year, I went along to the Level 2 Award in Pest Management – General Pest Control training course in Staffordshire as an observer.

We were having discussions about ticks, the diseases that they carry and the recent report of ehrlichiosis being detected for the first time in the UK.

While some of the attendees had heard of the brown dog tick, those new to the industry were not aware of its significance.

The brown dog tick (Rhipicephalus sanguineus) is a non-native species and one that is on the increase in the UK.

Unlike our native species of tick, which does not survive indoors, the brown dog tick can survive in people’s homes and thrive, completing an entire lifecycle indoors.

This may mean that a pest management technician has to become involved in the control of these pests and any potential infestation.

The brown dog tick can be recognised by its reddish-brown colour, elongated body shape, and hexagonal basis capituli (flat surface where mouthparts are attached).

What do we need to look out for if we are called to investigate a suspected tick infestation?

While our native species can sometimes be found in a pet’s bedding they will not be found in other areas of the home.

If you are finding ticks crawling around on walls, floors, curtains or in items of furniture then this could be the brown dog tick.

In this case correct identification needs to be carried out. You can do this by contacting Public Health England or contact tick@phe.gov.uk

Only approved insecticides must be used.

Treatment will normally involve the application of residual insecticides (acaricides) approved for tick control both indoors and around buildings.

These products can be sprayed directly on to ticks or to surfaces. Certain dessicant powders and ultra low volume (ULV) cold fog products are also approved for tick control.

The female can lay up to 4,000 eggs and can survive for up to 18 months without a blood meal. Repeat treatments are often needed.

Be sure to get all cracks and crevices where ticks may be harbouring; you may also need to apply an appropriate treatment around the perimeter of the house.

This tick species is capable of living on the walls outside the affected properties so these areas may also require treatment.

The female can lay up to 4,000 eggs and can survive for up to 18 months without a blood meal. Repeat treatments are often needed.

You might want to contact your product distributor to discuss appropriate treatment options and remember to advise the homeowner to take their pet to the vets for treatment too.

Ticks on pets must be removed as soon as possible, however this can be quite tricky.

Refer your client to a vet for this, rather than trying to do it yourself. It’s a good idea to advise them to discuss preventative measures.

Ticks are a major concern for dog owners, especially if routine walks take place in long grass, woodlands or areas where sheep or deer roam around.

Ticks can be found all year round but are at their most active between spring and autumn. 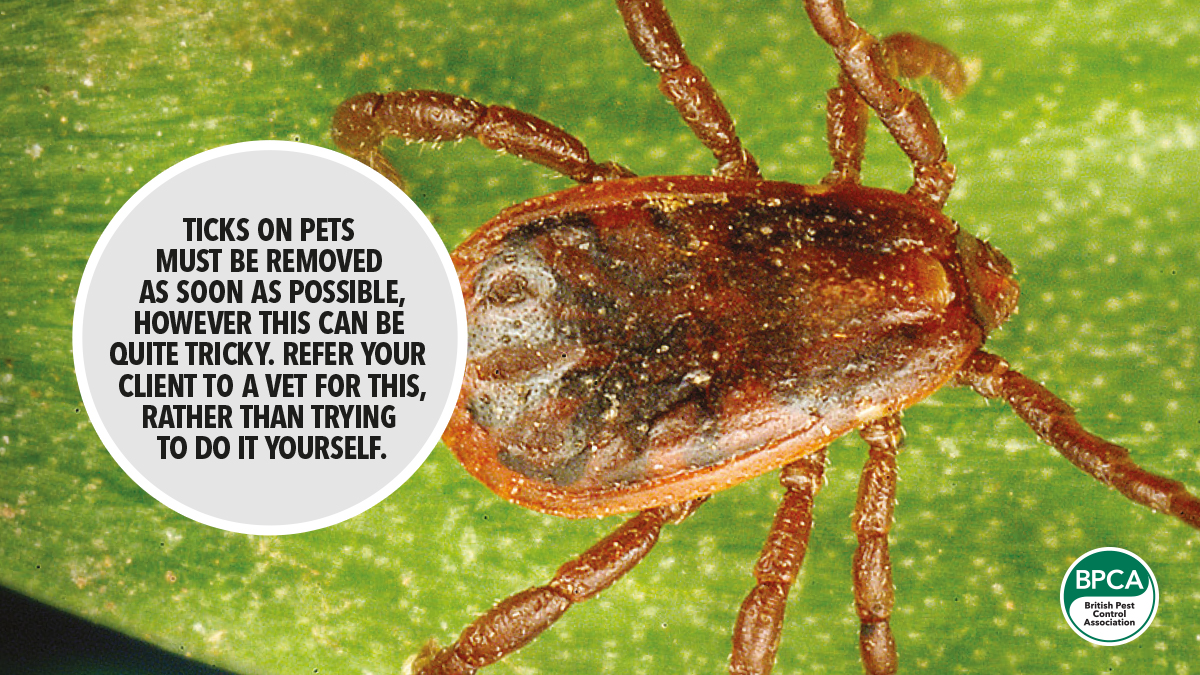 Pet owners should be advised to begin a routine of checking their dogs after walks.

Carrying out routine checks, paying particular attention to the ears, hind legs and paws should be performed after every walk.

Not an easy task, I might add, if you own two Jack Russell terriers like I do (I have the scars to prove it!).

But it’s one that is important to ensure a pet has not picked up any ticks.

Ticks can transmit diseases and are ‘vectors’, which means they can carry micro-organisms that can cause diseases in both animals and people.

The most common disease spread by ticks in the UK is Lyme disease.

Cases of ehrlichiosis have now been confirmed in the UK. Ehrlichiosis is a tick-borne bacterial infection, which infects and kills white blood cells.

The average reported annual incidence is around 2.3 cases per million people.

No human vaccine is currently available and so effective tick control is key.

The Tick Surveillance Scheme operated by Public Health England has reported an increase in tick distribution in the UK, and as our climate continues to change without harsh winters this is likely to continue.

The National Pest Advisory Panel (NPAP) of the Chartered Institute of Environmental Health (CIEH) has produced a really good leaflet which can be downloaded on their website.

If you need any further advice contact us here at BPCA, however I cannot promise to give advice on how best to check a Jack Russell for ticks!